Never thought I could bear to post a picture such as this; I’m turning some kind of corner. Let me be clear, I remain vociferous about the need for body cams and cop car video. They must become required standard issue equipment for all officers on duty.

Further, the citizen videos that have shown the world the truth of police brutality against black people have already changed the course of history. They are crucially important and most often beyond heroic.

But I also wonder at the way the steady stream of both sorts of videos plays into and expands the racist mentality that has a history of using such images as vindication and normalization. It’s black death as spectacle, snuff film. Notice how often the bodies are left to lie in the road. Or how the dying black person is handcuffed rather than given emergency care.

And yes, children, black and white, are seeing the videos and are forever shaped by the talk, the responses, the pronouncements they hear about them in their respective worlds.

There is no denying the smug gratification the old (often made into postcards at the time) and new images generate.

[I write this after sitting stunned in my seat listening to a call-in right-wing radio program. The hosts and the callers all but vied in outdoing each other spinning likely scenarios to vindicate the Oklahoma murderer. A whole lot of “well, we can’t really see what he is doing when he lowers his right hand. They might have though he was reaching for a gun.” It was like listening to a bunch of script writers in a writers room, each trying to top the others with “plausible” reasons to shoot the man dead in the street.

And it occurred to me that it is the latest installment in a sort of multi-act interactive performance. A game of Justify The Black Person’s Death.] 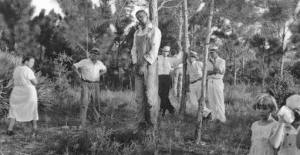