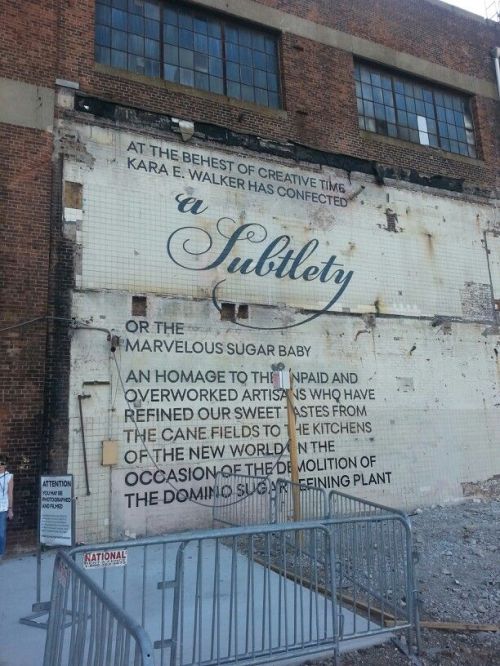 I was delighted to be asked by Women = Books to write this blog entry on the brilliant artist, Kara Walker.

SELMA Is A Film For The Ages

Just saw Selma, and it is a splendid and harrowing film. The Academy should be ashamed.

I think one issue is that it is such a fine mix of action and ideas. It is closer to a certain type of European movie that values the drama of intellectual, moral, and ethical dilemmas and decisions. Of the struggle of competing points of view/world views, of the dissonance of expedience in conflict with life and death decisions. And yet there is never a dull moment. And it includes a grown-up love story. And excellent acting throughout.

It’s an intelligent film. And let’s face it, the last thing a white American audience wants to see is a really strong film, made by a black woman, about a bunch of intellectually astute black people consciously making history.

I’d say much of the bizarre pushback against this film is because the story of this historic American confrontation is told in a way that does not conform to bland American norms of cinematic entertainment.

Posted in A Film For The Ages, African American history, MLK, Selma

Massacre at the Borghese Galleries

Figuring out how to post this. Phone won’t allow download of whole thing which does go on for a while.

Standing watching when a group of Italian teenagers who spoke no English asked we what the scene was. Me? Launched into a Marx Brothers/Sid Caeser docent attempt. A little Italian. A little Spanish, “Does anyone here speak French who could translate into Italian?” We had quite a little crowd.

Young people don’t know the iconic Biblical stories, so I was trying to ‘splain how this was part of the Xmas story hence a seasonal installation in this historic gallery. Concluded nicely with smiles, thanks, and smattering of applause.

Here is background on the installation: 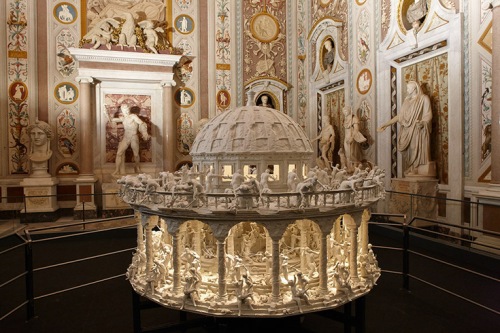 Posted in Borghese Gallery, Massacre of the Innocents, Rome

The World In Africa

Boggles the mind both for size and for all the geo-political and historical implications. Especially considering how many people still think of Africa in some fuzzy way as a “country,” if and when they think of it at all.

Posted in Africa Is Not A Country, African Continent, The Size of Africa

Tagged Africa Is Not A Country, African Continent, Size of Africa

I was honored to be invited to be one of the speakers at the candlelight vigil in our town square last month. These are my remarks.

Michael Brown was a flawed, teenaged, knucklehead, who had been shortchanged growing up by lousy schools, and limited horizons. He committed a stupid and bullying act. And according to far too many people, who he was and what he did equaled a capital offense. One which justified not only shooting him down in the street, but leaving his body there unattended for 4 ½ hours in the heat of August. In America. While the police officer who shot him went into hiding without even filing a report.

And when we turned our eyes away from those photographs of an 18 year old, dead in the street, we found ourselves seeing over and over again video of Eric Garner, overpowered, brought down, his head and torso forced to the sidewalk, his pleas ignored, and EMT care flagrantly, callously, denied him. And he died there, on the sidewalk. In America.

And as we exclaimed over that video, another appeared. Tamir Rice, a 12-year-old boy playing alone in a park on a chilly day; a bit bored, a bit lost in his own thoughts of derring-do, playing with his toy gun. We see a police car surprise him and two seconds, two seconds later, he is dying on the ground. And the officers in the car did not go to his aid. And they said they had warned him three times to put down that gun. That was before they knew they had been videotaped.

And Akai Gurley walking down the stairs in the building where he lived in New York City, shot dead by police in a dark hallway. The officers called their union rep. while the man died, and before they called for assistance.

What those who died had in common was being black, and male. In America.

But I don’t have to tell you about those outrages. We are the choir. We’re out here in this cold because we are the choir. So what would I, a fellow member, ask of the choir? Three things.

First, talk about it. We all have to sort out our thoughts on what is happening. On the culture of American law enforcement that closes ranks in support of bad apples and makes it too great a risk for good men and women in departments to speak out against police malfeasance. Gather information, current and historical, and do the work of thinking this through. Not alone, not in isolation; conversations, certainly. The way of change, worldwide, going forward, will involve the widest possible conversations by way of social media.

So talk with people you know. Yes, those vaunted conversions on race – so often honored in the breach. There are many reasons why staged interracial conversations often fizzle out, including the inevitable imbalance between ongoing experience on one side and intermittent curiosity on the other.

So how about you white folks talk to each other? That’s hard, too. But it is crucial to have conversations about these matters that don’t end when each party gets into a car and they drive home in opposite directions, to become strangers again.

Second, act locally. One case in point: do our part to make sure that here as across the country, every police officer’s basic equipment includes a body camera. That every police vehicle is equipped with a dashboard camera. Racist violence happens throughout our society. But what has brought us here tonight is the nature of the interaction between predominantly white American police forces, and unarmed black men, women, and children.

And the third, and final thing I’ll say is that we all must hold at least one thing in clear focus as we think, talk, demonstrate, and that is one word, one demand, one outcome. Accountability. That those who wield the power and the weapons stand genuinely accountable to the communities they police. That’s not the only thing we want, change is difficult and multi-layered, but we must insist upon that fundamental thing, unbiased, transparent, official accountability. Without it, justice cannot breathe.

Photo credit: A Race Together

About That Paris March… 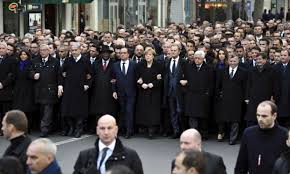 Okay, I’m feeling dense here. The massacre at Charlie Hebdo was an act of fundamentalist religious madness with an undeniable political dimension that makes it all the more horrendous as a potential goad to other criminal and/or deranged extremists who see it as an acceptable act of revenge for insults to Islam

The simultaneous attack on the kosher market was another facet of religio-fascist Islamic fanaticism that considers Jews a particularly heinous subset of infidels.

I understand the spontaneous gatherings of the thousands who poured out into the streets of Paris. My older son was among them. In the midst of such trauma and uncertainty (the killers were still on the loose; the shoppers in the market were being held hostage) such an act of community, solidarity, and mourning is a good, positive response.

I understand the immediate messages to the French nation of concern and condolence from world leaders and prominent international figures.

What I don’t really get, as I think about it, is the meaning of all those dignitaries and heads of state, many of of them, as has been pointed out, among the cruelest dictators on the planet, some of the most repressive national leaders, who, even as they march in Paris, hold journalists, dissenters, political rivals, etc. in brutal captivity. Who torture, exile, spy on, and silence their own people on merely the suspicion of dissenting ideas.

What, exactly, is the message of this outpouring of the notable and the just plain folk? Why do I feel this is one big anti-Islamic gesture that will further marginalize millions of men, women, and children resident in western nations, and give license to the demonization of Muslims worldwide? I just don’t see this cadre of “world leaders” dropping everything to go stand up and be counted for Liberty, Equality, and Fraternity, or for freedom of the press, or for… what, exactly? 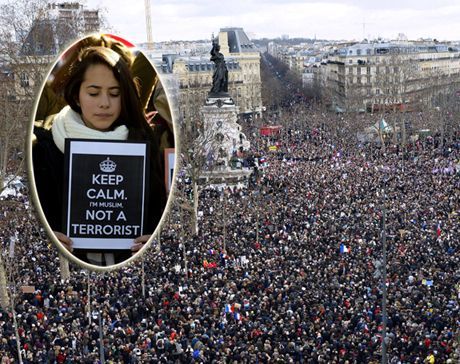 Not going all up into it just now. Murder is murder, and we owe respect and a decent interval to the deceased.

However, I’m saying that I have long had issues with French, and some other European, free- for-all-let-it-rip racist humor. I assume the black and Arab caricatures are rooted in colonialism. The anti-Semitism is home-grown.

The steady background presence of casual racism from Tintin (ok, Belgian, but big in French nurseries) to all sorts of ads (Y’a Bon, of my youth, hung in until 2006, I see) and cartoons, political and otherwise, is too easily dismissed as freedom of whatever with no accountability for content.

Of course they should be free to publish whatever they want, but don’t pretend that repetitious racist schlock is sharp-edged political discourse or subversive satire.

Charlie Hebdo should keep going as a matter of free speech; once in a while they even make a clever point (“It’s so depressing to be worshiped by idiots” says Mohammad). But look at those same graphics and imagine them from the LePen camp. Maybe some of the anti-Catholic stuff wouldn’t fly there, but much of the rest would be right at home. How is all that racist, sexist, homophobic, anti-Semitic juvenilia supposedly brimming with political or social insight? Yes, there’s really vicious stuff from right wing publications, but it’s not always easy to tell the difference… 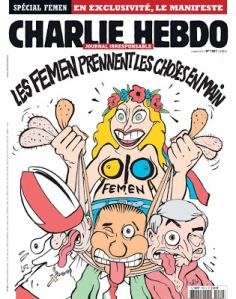 So Josephine Baker’s bananas make me wince, but she made up for it by risking her life during the War.