Posted in Black Man In Elevator

How can Obama, of all people, be so slow in ending DADT?

Dan Choi’s ring was returned on the December 2010 day that President Obama signed the legislation to end Don’t Ask, Don’t Tell. He accepted it back graciously and remarked that he hoped the next time a man gives him a ring it will be as part of their wedding ceremony. 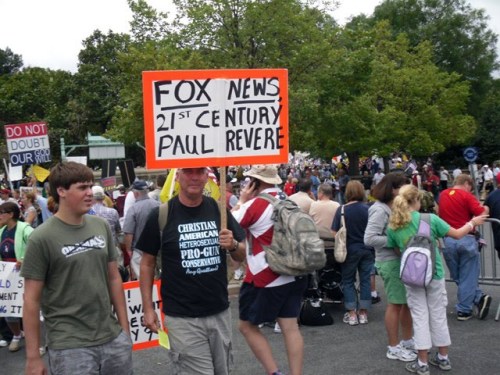 This will be Beck’s I HAVE A SCHEME speech.

What if these people really looked at their motives and told the truth:

1. The international political scene is perilous and reasonably causes great anxiety – – finance and terror included. Beck’s followers want simple answers to complex issues and he promises that, although all he really delivers is double talk.

2. Many of Beck’s followers will never be able to accept a black president as the person in charge, the person who gives orders and makes decisions. It is not a matter only of policies, racial mistrust is a political and visceral issue for most of them.

3. It’s silliness to say this DC gathering is not political. Honor is a fine concept, but it is an abstraction, not something thousands gather to support

4. Any group that emits that much rage is covering their fear, anxiety and sense of weakness. They need someone to be better than, so Beck convinces them that only he and they have “The Truth” and they can look down on everyone who disagrees.

5. Beck is an all-American huckster, making money on the backs of those who have so little. He earns a huge salary from Fox, so why does he have to charge his followers for everything, including this university course scheme? The truth may set you free, but in his plan you certainly will not get your hands on it for free – – and you should buy the over-priced t-shirt and the mug while you’re gaining wisdom.

6. It would be funny if it weren’t at the expense of his fellow Americans that Beck has his followers throwing around words such as Communist, Nazi, Progressive (of all things) with no understanding of what they mean or how they in fact contradict each other.

7. Having people focus on him and his huge ego, Beck turns them away from the pressing issues of the moment where they could be putting their attention and energy. He deliberately closes them off from mainstream news sources so they become less and less informed.

By convincing people that they have the only truth, he cuts off conversation – – let alone debate – – that would allow people to get to know others not like them but who are still good people. This is a classic tactic of a controlling ego.

The billboard below was put up by Iowa Tea Party members, but more rational heads prevailed and it was removed. 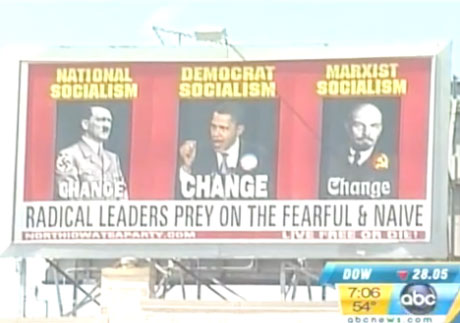 How Big Is The BP Oil Spill?

The Size of the Oil Spill

This interactive map lets you compare it to where you live. Pretty amazing.

Oscar Grant was lying face down on the BART subway platform when he was shot point blank in the back by a Transit Officer. There were numerous witnesses and at least seven people videotaped the shooting. Today a jury found that officer guilty of involuntary manslaughter – – 2-4 years sentence.