Up, down, or across, each one nails it.

From the very beginning, the reaction to Ferguson has felt different, and over the months the protests there never let up. Now this is happening across the country. American Spring? 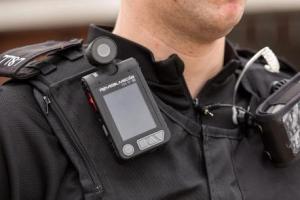 Ferguson is far from over, but there is a sense of “what can anyone do?”

A practical next step to combat the widespread sense of helplessness among good people is to really take up the cause of police bodycams.

They must be required equipment, a part of the uniform. Police unions are fighting them, but it is a cause that can grow if people want it to.

Given the amount of pushback against the credible stories about Cosby’s behavior, I suspect many people are passing through a fandom version of the stages of grief, including, denial and anger, as we come to terms with Bill Cosby being a wonderfully talented, complex, and flawed human being.

He has seen great success and endured dreadful tragedy. His family life has long been known to be problematic, with estrangements on the home front, and many extramarital affairs.

He is an extremely intelligent man who has taken the kinds of sexual risks that suggest he rejects good judgment in that area of his life for whatever reason.

I place myself, with sadness, on the side of the women who are speaking out. It is horrible to see his name and aspects of his reputation crushed under the weight of all this, but it is unfair to ask these women to remain silent about their trauma.

It’s also clear that if only the first few came forward, they would have likely been dismissed as being all the things they have already been called. There is a tipping point in terms of numbers and the similarity of the accounts. Each woman is speaking out as an act of solidarity, not to destroy him, but to affirm the truth and damage each has lived with in silence for so long because they had no hope of being believed.

Beyond that, he’s lucky he didn’t kill anyone with what sounds like reckless use of powerful drugs. And how was that even necessary when there would have always been plenty of women willing to sleep with him. He hardly had to resort to such subterfuge unless that was a turn-on for him.

I find the account below totally believable, especially in the context of the other narratives. This is not a woman who has anything to gain. Nobody wins, but the truth does matter. 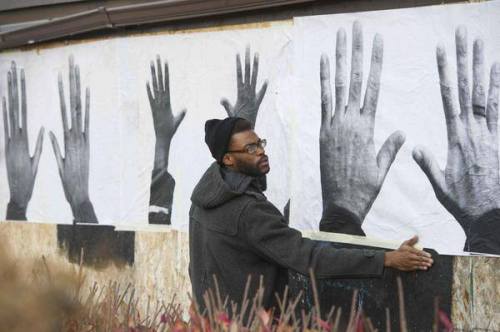 Leonard Blair hangs Damon Davis’ artwork on plywood covered windows in Ferguson, MO. Hands up. All sizes, ages, colors, genders, in black and white photos. Pasted over raw plywood on windows boarded up in anticipation of the grand jury decision.

Once again, Black improvisation, under siege and defying oppression, produces brilliant art. But at what human cost? 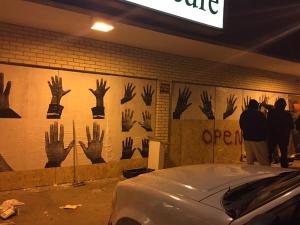 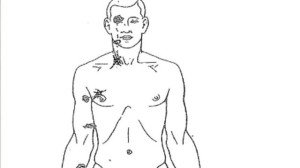 Feeling pull to be there if Darren Wilson is not indicted. Michael Brown was flawed, teenaged knucklehead, shortchanged by lousy schools, cul de sac life options, on and on. None of it capital offense. He was “…the least of these.”

His body was left unattended on a neighborhood street, in front of families and children, for 4 hours. In America. While Wilson went into hiding without even filing a report.

This case has felt like a turning point from the start.

Lest We Forget… Presidential Medal of Freedom to be Given Posthumously to Chaney, Schwerner, and Goodman

This is a story that needs to be told in these difficult, divisive days.

THIS was the cost of voting rights protections that are considered “unnecessary” today. 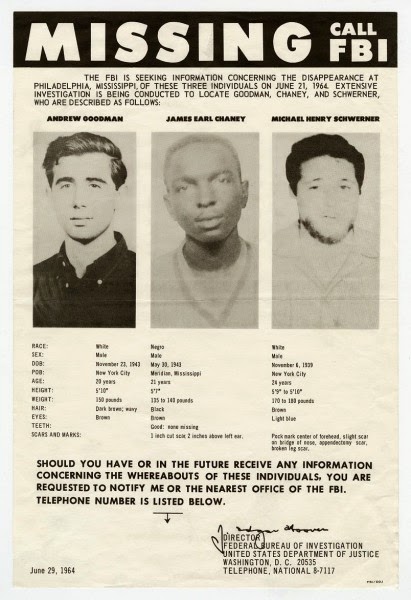 — Quote from an equipment operator hired by the FBI to dig for the bodies. The man was interviewed by The Meridian Star for a story published September 20, 1964; he was not identified, saying he feared for his life. The story was distributed by United Press International; this image was taken from the front page of The Delta Democrat Times in Greenville. (Story available through http://www.newspapers.com.)

— Photo from the FBI, made public in 2005 during the trial of Edgar Ray Killen

“Good evening, three young civil rights workers disappeared in Mississippi on Sunday night near the central Mississippi town of Philadelphia, about 50 miles northeast of Jackson. The last report on the trio came from Philadelphia police, who said they were picked up for speeding on Sunday, fined $20, then released.”

[Credit: Selected text and images are from this excellent illustrated timeline, a work of meticulous research. Please contact me if you would like further identification.

Went with dear friend Ellen to the Chris Ofili retrospective at the New Museum in NYC this weekend. Spectacular hardly begins to describe it. Full of thought-provoking surprises, painting, drawings, sculpture, beauty, brilliance, (along with just a bit of the famous/infamous encased elephant dung). Three full floors of his work.

I really recommend the recent New Yorker Ofili profile before you go, or if you don’t get a chance to go. 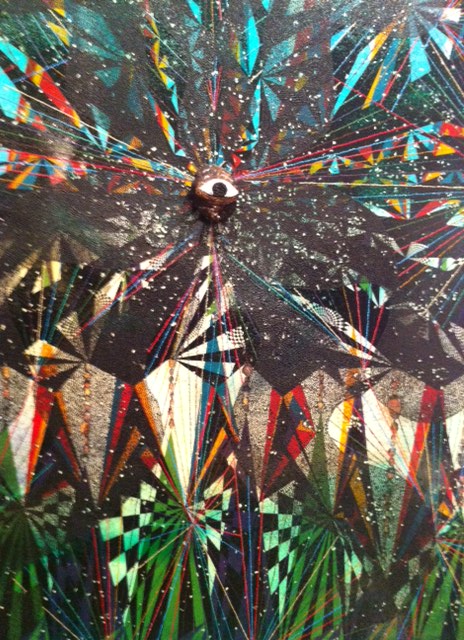 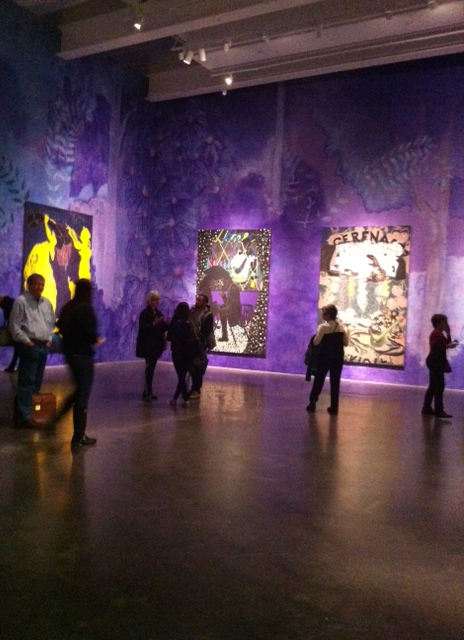