Not going all up into it just now. Murder is murder, and we owe respect and a decent interval to the deceased.

However, I’m saying that I have long had issues with French, and some other European, free- for-all-let-it-rip racist humor. I assume the black and Arab caricatures are rooted in colonialism. The anti-Semitism is home-grown.

The steady background presence of casual racism from Tintin (ok, Belgian, but big in French nurseries) to all sorts of ads (Y’a Bon, of my youth, hung in until 2006, I see) and cartoons, political and otherwise, is too easily dismissed as freedom of whatever with no accountability for content.

Of course they should be free to publish whatever they want, but don’t pretend that repetitious racist schlock is sharp-edged political discourse or subversive satire.

Charlie Hebdo should keep going as a matter of free speech; once in a while they even make a clever point (“It’s so depressing to be worshiped by idiots” says Mohammad). But look at those same graphics and imagine them from the LePen camp. Maybe some of the anti-Catholic stuff wouldn’t fly there, but much of the rest would be right at home. How is all that racist, sexist, homophobic, anti-Semitic juvenilia supposedly brimming with political or social insight? Yes, there’s really vicious stuff from right wing publications, but it’s not always easy to tell the difference…

So Josephine Baker’s bananas make me wince, but she made up for it by risking her life during the War. 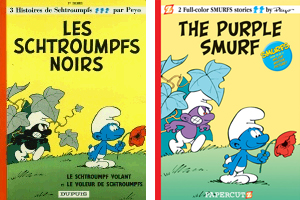