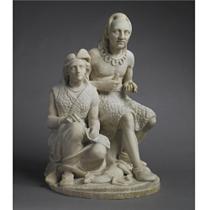 Marilyn Richardson writes: “Along with income from sales and commissions, Edmonia Lewis supported herself through the sale of marble busts and groups illustrating scenes from Henry Wadsworth Longfellow’s phenomenal bestseller, the epic poem The Song of Hiawatha (1855). While inumberable painters and sculptors drew inspiration from that poem, Lewis’s figures were particular favorites among collectors, created as they were by the hand of a woman known to be part Ojibway.

“Copies of The Old Arrow Maker (sometimes called The Old Arrow Maker and His Daughter) identical in design and composition, were also titled The Wooing of Hiawatha. Both titles come from Longfellow’s Chapter X, “Hiawatha’s Wooing,” which includes the passages:

At the doorway of his wigwam
Sat the ancient Arrow-Maker…
Making arrowheads of jasper …
At his side, in all her beauty,
Sat the lovely Minnehaha …
Plaiting mats of flags and rushes; …

At the feet of Laughing Water
Hiawatha laid his burden,
Threw the red deer from his shoulders;…

This entry was posted in 19th century, Edmonia Lewis. Bookmark the permalink.