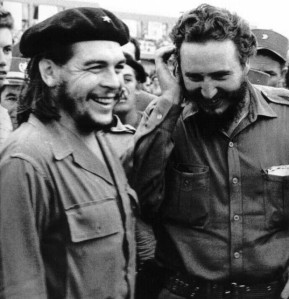 “Revolution is a moment”

I’m always ready to go back and see more. There are things to admire, things to question, and I certainly wish the racial situation were better.

Since visiting Cuba a few weeks ago, I’ve been thinking about the visual assault on our lives. Climb in a New York taxi these days and a TV comes on with its bombardment of news and ads. It’s become passé to gaze out the window, watch the sunlight on a wall, a child’s smile, the city breathing.

In Havana, I’d spend long hours contemplating a single street. Nothing — not a brand, an advertisement or a neon sign — distracted me from the city’s sunlit surrender to time passing. At a colossal price, Fidel Castro’s pursuit of socialism has forged a unique aesthetic, freed from agitation, caught in a haunting equilibrium of stillness and decay.

Such empty spaces, away from the assault of marketing, beyond every form of message (e-mail, text, twitter), erode in the modern world, to the point that silence provokes a why-am-I-not-in-demand anxiety. Technology induces ever more subtle forms of addiction, to products, but also to agitation itself. The global mall reproduces itself, its bright and air-conditioned sterility extinguishing every distinctive germ.

Paris, of course, has resisted homogenization. It’s still Paris, with its strong Haussmannian arteries, its parks of satisfying geometry, its islands pointing their prows toward the solemn bridges, its gilt and gravel, its zinc-roofed maids’ rooms arrayed atop the city as if deposited by some magician who stole in at night.

It’s still a place where temptation exists only to be yielded to and where time stops to guard forever an image in the heart. All young lovers should have a row in the Tuileries in order to make up on the Pont Neuf.

Yet, for all its enduring seductiveness, Paris has ceased to be the city that I knew. The modern world has sucked out some essence, leaving a film-set perfection hollowed out behind the five-story facades. The past has been anaesthetized. It has been packaged. It now seems less a part of the city’s fabric than it is a kitschy gimmick as easily reproduced as a Lautrec poster.

I know, in middle age the business of life is less about doing things for the first than for the last time. It is easy to feel a twinge of regret. Those briny oysters, the glistening mackerel on their bed of ice at the Rue Mouffetard, the drowsy emptied city in August, the unctuousness of a Beef Bourguignon: these things can be experienced for the first time only once.

So what I experience in Paris is less what is before me than the memory it provokes of the city in 1975. Memories, as Apollinaire noted, are like the sound of hunters’ horns fading in the wind. Still, they linger. The town looks much the same, if prettified. What has changed has changed from within.

At dinner with people I’d known back then, I was grappling with this elusive feeling when my friend lit a match. It was a Russian match acquired in Belgrade and so did not conform to current European Union nanny-state standards. The flame jumped. The sulfur whiff was pungent. A real match!

Then it came to me: what Paris had lost to modernity was its pungency. Gone was the acrid Gitane-Gauloise pall of any self-respecting café. Gone was the garlic whiff of the early-morning Metro to the Place d’Italie. Gone were the mineral mid-morning Sauvignons Blancs downed bar-side by red-eyed men.

Gone were the horse butchers and the tripe restaurants in the 12th arrondissement. Gone (replaced by bad English) was the laconic snarl of Parisian greeting. Gone were the bad teeth, the yellowing moustaches, the hammering of artisans, the middle-aged prostitutes in doorways, the seat-less toilets on the stairs, and an entire group of people called the working class.

Gone, in short, was Paris in the glory of its squalor, in the time before anyone thought a Frenchman would accept a sandwich for lunch, or decreed that the great unwashed should inhabit the distant suburbs. The city has been sanitized.

But squalor connects. When you clean, when you favor hermetic sealing in the name of safety, you also disconnect people from one another. When on top of that you add layers of solipsistic technology, the isolation intensifies. In its preserved Gallic disguise, Paris is today no less a globalized city than New York.

Havana has also preserved its architecture — the wrought-iron balconies, the caryatids, the baroque flourishes — even if it is crumbling. What has been preserved with it, thanks to socialist economic disaster, is that very pungent texture Paris has lost to modernity.

The slugs of Havana Club rum in bars lit by fluorescent light, the dominos banged on street tables, the raucous conversations in high doorways, the whiff of puros, the beat through bad speakers of drums and maracas, the idle sensuality of Blackberry-free days: Cuba took me back decades to an era when time did not always demand to be put to use.

I thought I’d always have Paris. But Havana helped me see, by the flare of a Russian match, that mine is gone.

Two books by my late friend, Jane, McManus, who lived in Havana

This entry was posted in Cuba and tagged Cuba. Bookmark the permalink.