Now that we have the fascinating story of Dido Belle, let’s take another look at this supposed portrait of Phillis Wheatley in evening dress.

Published in a French review in the 1830s, long after Wheatley’s death, there is virtually no documentation to establish the subject’s identity. I’d say it is far more likely a depiction of Dido Belle.

Scone Palace, Perth (private collection of the Earl of Mansfield 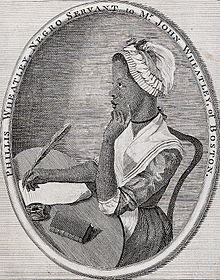 Engraved portrait of Phillis Wheatley, used as the frontispiece to her collection of poems, Reflections on Various Subjects Religious and Moral (London, 1773). Attributed to the poet and visual artist Scipio Moorhead, a slave in Boston, Massachusetts, and a friend of Phillis Wheatley. One element of the identification of the  portrait as Wheatley might have been a mention of the subject’s finger held to her cheek.