In this year of the film “Lincoln,” and the anniversary of the Emancipation Proclamation, let’s be clear that freedom was never bestowed upon black Americans.

This is the Saint-Gaudens memorial on Boston Common to the 54th Massachusetts Regiment, just one among the black Union regiments. Contrary to the impression left by Hollywood, they were not utterly wiped out at Ft. Wagner. Their numbers restored, they took part in other battles.

The figure floating above the marching troops is the Angel of Death. Emancipation did not come with the stroke of a pen. 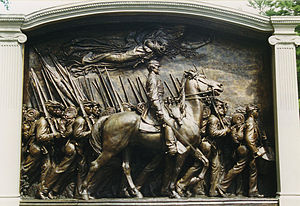