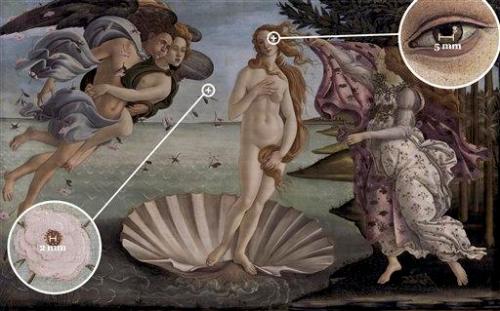 This week, an Italian company put online high-resolution images of “The Birth of Venus” and five other masterpieces from the Uffizi gallery in Florence, including works by Caravaggio and Leonardo da Vinci.

By zooming in with the click of a mouse, the smallest details can appear — even ones that aren’t typically visible when viewing artworks at the distances required by museums for security.

Mario Resca, a Culture Ministry official who worked on the project, says it’s like looking at a painting “with a giant magnifying glass.”

In Caravaggio’s “Bacchus,” for example, the trace of a tiny self-portrait that the artist painted in the wine jug becomes detectable, as do the wine bubbles on the rim of the jug. In Leonardo’s “Annunciation” computer users can see the brush strokes in the maritime background and the delicate patterns of the cloth underneath the Bible.

The images have a resolution of up to 28 billion pixels, said Vincenzo Mirarchi, CEO of the Haltadefinizione company that digitized the paintings. That’s about 3,000 times stronger than the resolution of an average digital camera.

The company put Leonardo’s “Last Supper” online three years ago, but the technology has advanced since then. Today, it shows details up to a hundredth of a millimeter.

The technology entails taking hundreds of pictures of tiny portions of the artwork and then combining them to recompose the whole image. Lighting is crucial, says Mirarchi.

Officials insist the technology poses no danger to the paintings, as it doesn’t employ infrared and uses only a minimum amount of light.

The reproductions can allow researchers and art-lovers to study an artwork from afar, but they also represent a historical document of how a painting appears at a given time.

Officials also hope to bring tech-savvy youths and other potential viewers closer to art by making it accessible on their laptops. They say a virtual visit will encourage — rather than dissuade — many of them to make an actual visit to a museum.

“All that is put online helps promoting the knowledge of great masterpieces like those in the Uffizi,” Resca, the Culture Ministry official, said Friday in an interview.

“New audiences are important to us: youths, families, people who work,” he said “Some of them will get passionate.”

The images are staying online, free of charge, until Jan. 29. After that, Haltadefinizione says it might digitize more artworks and eventually create a virtual museum.

This entry was posted in Uffizi. Bookmark the permalink.