Nevill Coghill and the Inklings

An article about “Dick and Liz” in Vanity Fair got me thinking about Nevill Coghill my older son’s “honorary grandfather.” He, C.S. Lewis, Tolkien and others made up the Oxford group, the Inklings, who gathered at the Eagle and Child pub. Once we were having dinner in Williamstown, MA, where Nevill was to speak at Williams College when a waitress came to the table to tell him he had a phone call. (Long before the advent of cell phones.) He asked if the person could leave a name and number since he, Grandmother Helen, Clifford and I (were there others?) were in the middle of dinner. The waitress grew uneasy and said that it was an international call, and then, perhaps because she did not want to alarm a distinguished elderly gent, or perhaps she just could not contain herself, she announced that it was Richard Burton. Nevill rose, shaggy, tweedy and a bit lumbering, and was ushered to the phone.

Tables around us fell silent as people stared, then went back to their conversations. When he came back, though, the local hush descended again as some diners eavesdropped on his explanation that Burton wanted to confer with him on some of the fine points of his performance of Dr. Faustus which they had been working on together. For years I had remembered it as when they were doing Antony and Cleopatra, the VF article gave me an aha! moment; A & C was a couple of  years earlier. 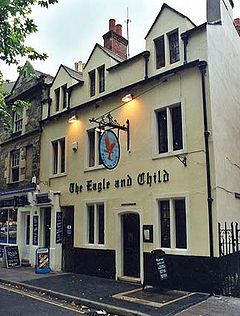 This entry was posted in Coghill, Inklings. Bookmark the permalink.