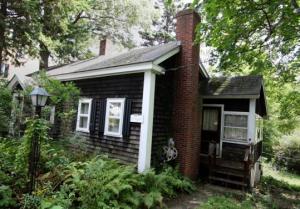 In Concord, a bid to save tie to abolitionist days

CONCORD – Amid such historical touchstones as Walden Pond and the Old North Bridge, the quaint cottage barely merits a second glance, just another Revolutionary-era New England house in a town steeped in the past.

But the brown shingled house on Bedford Street, built in the 1780s by the town’s first freed slave, is the last of its kind, a crucial but long-forgotten link to the town’s early black community and abolitionist movement. With the house in danger of being demolished, its history has emerged from obscurity, and advocates have mounted a spirited campaign to stave off its demise.

The owners, who were bequeathed the property, had applied for a permit to level the one-story house in hope of selling the land, while the town wants to save the house for posterity. A six-month stay issued by the town expired Saturday, and while there are no immediate plans to level the house, advocates are scrambling to raise $30,000 for moving costs to keep it from harm.

While tourists flock to Concord for its famed battle sites, cemeteries, and homes of literary giants, the town’s history of slavery, and the lives of former slaves and their descendants, is sadly overlooked, local historians say. Bringing it to light, they said, would help make the town’s storied history whole.

“It’s really the only physical structure left that links to that era,’’ said Polly Attwood, a member of The Drinking Gourd Project, whose name was inspired by a spiritual song that once instructed fugitive slaves to head to freedom in the North by following the Big Dipper, symbolized by a gourd.

The organization, part of the Concord-Carlisle Human Rights Council, is seeking to turn the house into a museum chronicling Concord’s African-American and abolitionist history.
“This is a true part of the town’s history, and I think we do a disservice if we don’t include all of it,’’ Attwood said.

For nearly a century, three generations of black residents descended from a freed slave named Caesar Robbins lived in the house. A veteran of the American Revolution, he was freed in 1780, the year that Massachusetts enacted a Declaration of Rights stating that “all men are born free and equal,’’ said Lou Sideris, chief of planning and communications at Minute Man National Historical Park.

The house is also closely associated with the abolitionist movement, and once hosted a meeting of the local Female Anti-Slavery Society.

Until recently, this rich history was scarcely known. But after the house’s last owner, Agnes Mackino, died, the house was bequeathed to several heirs, who last spring applied for a demolition permit. That quickly drew the attention of advocates who, after learning of the house’s storied history, urged the town’s historical commission to intervene. Convinced of the site’s importance, the commission granted a six-month reprieve.

The house’s front yard is badly overgrown, with vines crawling up the lamppost out front. In comparison to the neatly kept yards along the street, the green jumble gives the house a fittingly mysterious feel. The only nod to history is a wooden marker that reads “Peter Hutchinson C. 1780.’’
Those working to save the house have raised $7,000 and are busily writing grant applications to historical groups for additional funds.

The house, which is assessed at $384,000, is currently on the market, but the size of the property might prove a deterrent. Marcia Rasmussen, the town’s director of planning and land management, said that at less than half an acre, the lot is too small to build on without a special permit.
Still, owners could sidestep the zoning requirement by overhauling the house without officially building anew, preserving its grandfathered status.

A Concord lawyer representing the heirs could not be reached for comment. Rasmussen said she has had only preliminary discussions with the attorney about the town’s interest.
The realtor selling the property, Tammy Nuenighoff, said the house is being eyed exclusively as a tear-down, and that the buyers would probably be happy to have it taken off their hands.
“It’s cheaper to tear it down than renovate it, so it would save them the trouble,’’ she said. “The price is really for the land.’’

The town hopes to relocate the house to property it owns near the Old Manse, a 1770 house on the Concord River near the Old North Bridge. The town leases the land to the Minute Man park, which has expressed strong interest in adding the house as a destination.

“It’s a huge story and wonderful opportunity,’’ said Nancy Nelson, park superintendent.
Advocates believe the house’s links to freed slaves and the abolitionist movement will make it a destination for history buffs.

Caesar Robbins’s daughter, Susan, hosted at least one abolitionist meeting there. A later resident, Peter Hutchinson, the first black who registered to vote in Concord, was described by Henry David Thoreau as “a dexterous pig-butcher.’’

Hutchinson is buried down the road in an unmarked grave, a symbol of a legacy that deserves better, preservationists say.

“We always think of Concord’s history through the lens of the white male contribution,’’ said Maria Madison, who belongs to the Drinking Gourd Project. “Yes, they are phenomenal. But there were other incredible contributions from women and African-Americans in promoting civil liberties, and they should be recognized, too.’’

This entry was posted in Concord, MA slave house. Bookmark the permalink.