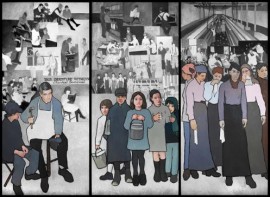 Maine Gov. LePage wants to remove mural from Department of Labor headquarters in Augusta. [A few days after this initial post the mural was removed.]

Jessica Graham, right, of Waterville, Maine, leads a gathering in front of a mural honoring labor, in the Department of Labor building’s lobby in Augusta, Maine.

The newly elected governor of Maine, Paul LePage, is outspoken. He said that after his election readers could expect to see in their newspapers, “LePage tells Obama to go to hell.” When he refused to attend a Martin Luther King Day event, he said of the NAACP, “Tell them they can kiss my butt.” Not to be outdone by other Republican governors who are attacking unions, over the weekend he ordered the removal of a 36-foot mural celebrating labor from the lobby of the state Labor Department building in Augusta, and is retitling its conference rooms to remove the names of past labor leaders. His reason? They might make businessmen uncomfortable. How many such businessmen visit the Labor Department? And how many faint with panic at the sight of a mural that depicts historical scenes from Maine’s labor movement, like women building ships during World War II, and a 1986 paper strike?

This ranks with the most famous removal of a mural from a public building in America, when John D. and Nelson Rockefeller destroyed a large painting they had themselves commissioned in 1932 from the famous Mexican painter Diego Rivera for their new Rockefeller Center building. Rivera called the painting “Man at the Crossroads,” and he included in the choices facing workers during the Depression a portrait of Lenin. When told he must remove the portrait, he refused, saying the commissioners knew his leftist record when they asked him to do the painting. He said he would balance the portrait with one of Lincoln. After the Rockefellers destroyed his art work in 1934, he recreated it in the Palace of Fine Arts in Mexico City, adding a portrait of John D. Rockefeller in a nightclub. The fracas inspired the best satirical poem of the century, by E. B. White. Can anyone match this for the dumb Maine governor?

I Paint What I See
[A Ballad of Artistic Integrity]

“What do you paint, when you paint on a wall?”
Said John D.’s grandson Nelson.
“Do you paint just anything there at all?
“Will there be any doves, or a tree in fall?
“Or a hunting scene, like an English hall?”

“I paint what I see,” said Rivera

“What are the colors you use when you paint?”
Said John D.’s grandson Nelson.
“Do you use any red in the beard of a saint?
“If you do, is it terribly red, or faint?
“Do you use any blue? Is it Prussian?”

“I paint what I paint,” said Rivera

“Whose is that head that I see on my wall?”
Said John D.’s grandson Nelson.
“Is it anyone’s head whom we know at all?
“A Rensselaer or a Saltonstall?
“Is it Franklin D.? Is it Mordaunt Hall?
“Or is it the head of a Russian?”

“I paint what I think,” said Rivera.

“I paint what I paint, I paint what I see,
“I paint what I think,” said Rivera
“And the thing that is dearest in life to me
“In a bourgeois hall is integrity;
However…
“I’ll take out a couple of people drinkin’
“And put in a picture of Abraham Lincoln.
“I could even give you McCormick’s reaper
“And still not make my art much cheaper.
“But the head of Lenin has got to stay
“Or my friends will give me the bird today,
“The bird, the bird, forever.”

“It’s not good taste in a man like me,”
Said John D.s grandson Nelson,
“To question an artist’s integrity
“Or mention a practical thing like a fee.
“But I know what I like to a large degree.
“Though art I hate to hamper,
“For twenty-one thousand conservative bucks
“You painted a radical. I say shucks,
“I never could rent the offices—
“The capitalistic offices.
“For this, as you know, is a public hall,
“And people want doves, or a tree in fall,
“And though your art I dislike to hamper,
“I owe a little to God and Gramper.
“And after all,
“It’s my wall.”

Diego Rivera, detail of Lenin from Man, Controller of the Universe (1934), a recreation of the destroyed mural Man at the Crossroads

This entry was posted in Diego Rivera, Maine Labor Mural. Bookmark the permalink.

One response to “Labor Mural In Maine by Artist Judy Taylor”