Sistine Brain. Do You Buy It?

In Vatican Fresco, Visions of the Brain

It has been hiding in plain sight for the past 500 years, and now two Johns Hopkins professors believe they have found it: one of Michelangelo’s rare anatomical drawings in a panel high on the ceiling of the Sistine Chapel. 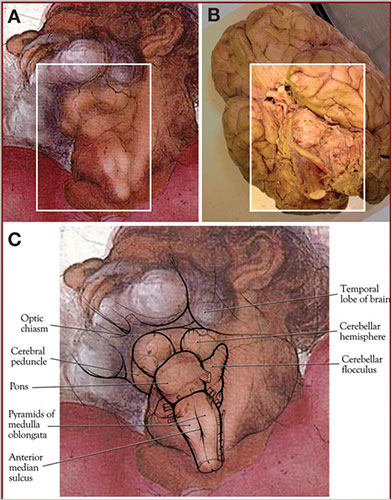 IN PLAIN SIGHT? Two professors believe that Michelangelo hid a drawing of the underside of the brain and the brain stem on the neck and beard of God.

Michelangelo was a conscientious student of human anatomy and enthusiastically dissected corpses throughout his life, but few of his anatomical drawings survive. This one, a depiction of the human brain and brain stem, appears to be drawn on the neck of God, but not all art historians can see it there.

This is not the first picture of a human organ someone has found, or at least imagined, in Michelangelo’s Sistine frescoes. In 1990, in an article in the Journal of the American Medical Association, a physician described what he saw as a rendering of the human brain in the Creation of Adam, the panel showing God touching Adam’s finger. And one physician, a professor of medicine at Baylor University, published an article in a medical journal in 2000 suggesting that Michelangelo had included a drawing of a kidney in another ceiling panel. The author was, perhaps not coincidentally, a kidney specialist.

The latest find, described in a study in the May issue of the journal Neurosurgery, appears directly above the altar in “The Separation of Light From Darkness,” another panel from the series of nine depicting scenes from the Book of Genesis.

God, clothed in flowing red robes, is viewed from below and foreshortened, and seems to be rising into the sky. His arms are raised above his head, and he faces up and to his right, exposing his neck and the underside of a short beard. It is here that the study’s authors, the medical illustrator Ian Suk and Dr. Rafael J. Tamargo, a neurosurgeon, believe that Michelangelo concealed a drawing of the underside of the brain and the brain stem, with parts of the temporal lobe, the medulla, the pons and other structures clearly drawn.

To Dr. Tamargo’s eye, God’s neck in the fresco is distinctly different from those of other figures depicted in more or less the same posture. Usually, the neck looks smooth, but in “The Separation of Light From Darkness” there are lines and shapes quite different from the normal external anatomy of the neck, irregularities that he believes cannot be accidental. “The anatomy of the neck is very, very unusual,” he said, and if it were not intentionally drawn that way, “you would have to postulate that Michelangelo had a very bad day, which is very unlikely because he was very meticulous.”

Is it really there, or are the authors seeing patterns where there are none? The interpretation, Dr. Tamargo said, “is certainly subjective — artists don’t accompany their work with a description of what they’re putting in there. But I think that as with any finding, it’s either validated or rejected by what others think.”

What others think varies considerably. “Suk and Tamargo appear to have done their homework well,” said Gail L. Geiger, a professor of art history at the University of Wisconsin, Madison. “I find the core of their piece quite convincing.”

But Joanna Woods-Marsden, a professor of art history at the University of California, Los Angeles, was outraged as much by the authors’ hypothesis as by their audacity in presenting it. “My initial reaction on looking at the illustrations is that this is complete nonsense, to put it politely,” she wrote in an e-mail message. “To draw arbitrary lines all over Renaissance paintings and expect to be taken seriously by the scholarly community!”

Some details seem to support the authors’ position. God’s beard, usually depicted as long and flowing, appears here short or rolled up to expose the neck. Light provides another hint. The fresco is illuminated from the lower left, but on God’s neck light shines head-on and slightly from the right. The authors insist that Michelangelo, a master of the depiction of light, could only have done this to draw attention to that part of the painting.

Still, some scholars remain dubious. “I think this may be another case of the authors looking too hard for something they want to find,” said Brian A. Curran, an associate professor of art history at Pennsylvania State University. “I don’t want to discourage people from looking. But sometimes a neck is just a neck.”

This entry was posted in Sistine Brain. Bookmark the permalink.

2 responses to “Sistine Brain. Do You Buy It?”